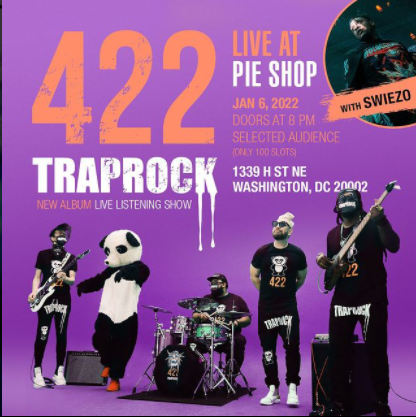 Ethan Spalding, with the 422 Band, is the originator of a new music genre, TRAPROCK, which synthesizes his varied music experiences and his approach to life. Ethan’s TRAPROCK “evolution revolution” incorporates big 808’s, heavy guitar riffs, and soul-shattering drums in a full live-band experience.

Not only can he rap about club life, working out, cannabis, eating healthy, songs for children, and socially conscious music, but Ethan can play a full range of percussive instruments including the timbales, congas and a full drum set with the 422 Band!

‘TRAP’ refers to hustle and ‘ROCK’ refers to whatever you like to ‘rock’ to. Ethan’s vision expands with the TRAPROCK Family and the 422 Band, ultimately including anyone thinking, working, and living “outside the box.” Ethan is never more alive than when he is on stage in front of an audience. Together performing with his wingman—a sneaker-head J-smoking dancing panda mascot—this memorable pair is introducing the world to a new type of crank and always leaves their audiences wanting more.
—

Since high school, Swiezo has made a name for himself as a true entertainer. After dropping out of college to pursue an acting career,the death of his grandmother hit him hard. Alone and in pain, he bounced around from psychiatric facilities to shelters and finally homeless, sleeping outside. Picking himself up, Swiezo channeled his pain into music; delivering motivational tunes for people in similar broken situations.
In 2018, Swiezo began developing a local buzz after the release of his debut project, “Apocalypse Out Loud.” Since then, Swiezo has elevated his brand and his status in the music scene. His unique sound and infectious stage presence captivates audiences from all walks of life and creates an environment that takes on a life of its own.
Swiezo’s highly anticipated studio album, Swiezoland is available now on all platforms.